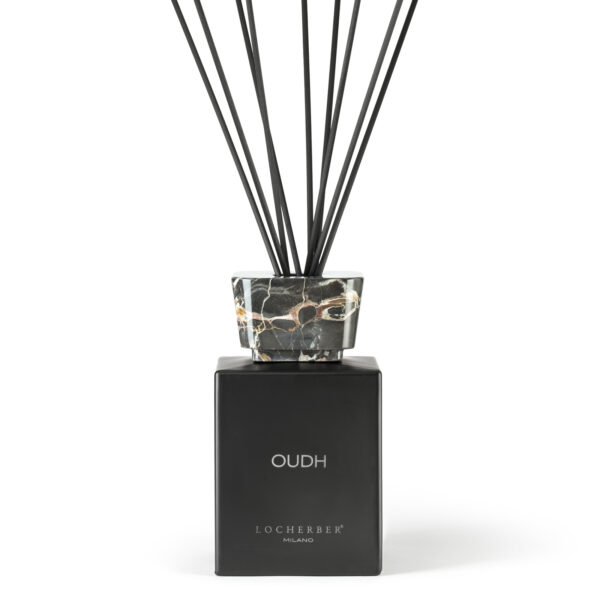 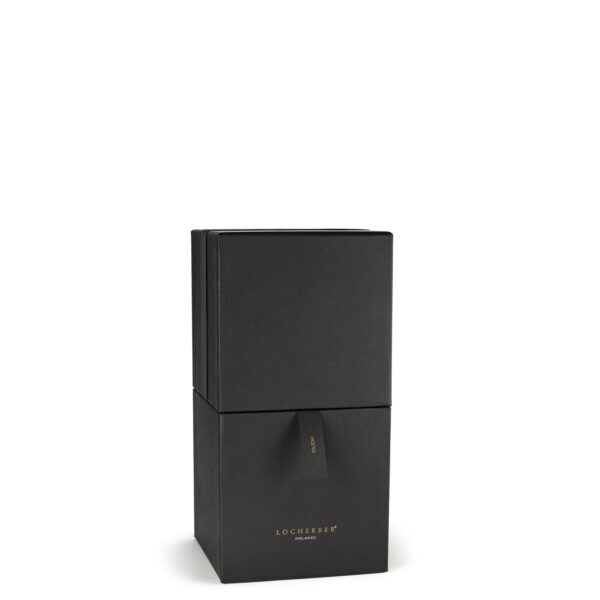 Woody, aromatic and ambery fragrance with violet leaf head notes combined with tree resins and incense, tobacco and coffee to finish with sandalwood and oud, patchouli, agar and amber wood.
Vase in hand-painted matt black glass.
Portoro marble cap of Locherber ® Milano in limited version.
Exclusive piece of furniture for those who want to dare and enhance even more the space that surrounds it.
Product presented with sticks and gift box.

Known since the dawn of time in different cultures and religions, but also in ancient medicinal practices, Oud (Oudh in the Arab world) is a very precious essential oil that can give a magical aura to the scents that contain it.
Locherber Milano has transferred its mystical charm into an eau de parfum with a seductive personality that recalls the odorous oriental atmosphere.
The Oud is derived from the hydro-distillation of Agarwood a dark and very aromatic resin that thickens in the trunks and roots of the trees of the species Aquilaria and Gyrinops (evergreens of Southeast Asia) when they are attacked by molds, insects and parasites or mutilated due to natural phenomena such as wind, lightning and animal aggression; it is therefore the tree itself that “cares itself” through this particular – and precious – resinous substance that impregnates and protects the wood, giving it strength.
However, not all Aquilaria trees produce Agarwood: its presence is increasingly rare and, above all, not visible outside the trunk, but only after cutting the tree itself.
If in the past the tree resources were used in a sustainable way by the local populations, today the commercial pressure has led to the depletion of the species, making Agarwood one of the rarest, precious and sought-after botanical materials.
Even today, particularly in the Middle East, it is burnt in the form of shavings in special incense burners to perfume the house and clothes.
Locherber Milano selects only the best essences in the countries of origin, to create natural and exclusive fragrances.
Aromatic and inebriating, Oudh opens with a note of violet leaves, evolves into resinous and softly spicy hints of incense, coffee and tobacco and closes in a woody finish of sandalwood, patchouly, agar, oud and amber.

The Portoro cap, naturally elegant, is made of marble mined in Italy in the municipalities of Portovenere and La Spezia and on a registered design by Locherber Milano it is sculpted by local artisans who create unique caps for customers who want to have a piece of Italian history and elegance. The name derives from Portorose (golden door) for its golden yellow streaks. In Roman times, Portoro marble was widely used in the imperial villas. Used by the Genoese in the construction of a strong place on the western promontory of the Gulf of La Spezia, then spread also outside of Liguria and in particular in France, to decorate palaces as versailles. In the early 1900s it was also exported to the United States where, for example, he dressed the projection room at Paramount.